You are here: Home / Words / Books / Highland Cowes: A History of Sailing in Scotland through the lens of Hunter’s Quay 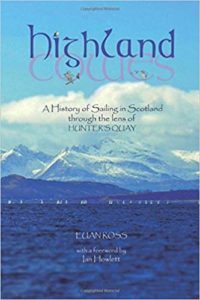 Countless well-researched histories of yachting have been published since Victorian times. But, unaccountably, not one has focussed on Scotland. While individual Scottish designers have been lauded, even lionised, in lush biographies, the wider story of sailing in Scotland has been marginalised. This rich and colourful vein of incident and anecdote is acknowledged only in passing. Highland Cowes attempts to redress the north-south balance and bring the wider story of Scottish yachting into the mainstream. The book employs a thematic approach with a range of topics presented in parallel as a diorama of events, viewed conceptually ‘through the lens’ of Hunter’s Quay – the village that lay at the heart of sailing in Scotland during the ‘golden age of yachting’.

The following extracts, from Ian Howlett’s Foreword, gives something of the flavour of the book.

“Accumulating an excess of old books on yachting has been a vice of mine since the early 1970s, when hidden gems were still to be discovered in the little bookshops of Southampton. These writings from the past feel of a different quality to almost all those of today. Highland Cowes is a most noteworthy and pleasing exception. This book, like old volumes of the Yachting Monthly, is to be savoured in front of a log fire along with a glass of malt.

Highland Cowes is a ‘magnum opus’ in all senses of the phrase, both in scope and content, describing the history of this extraordinary and beautiful area that was for so long the richest centre of all, for the design, building and racing of yachts. Euan Ross has a special talent for covering much ground in fine detail whilst rooting out the most entertaining stories. It is, of course, the latter that make history interesting. Euan’s approach and the resulting text is in marked contrast to what might be termed the ‘dumbed down’ museum techniques of today. He combines accuracy, along with the entertainment of many good stories, and like a good malt there is a complexity and depth to be appreciated.”

Brest: the world’s largest maritime festival in photographs by Nigel Pert & Dan Houston with a … END_OF_DOCUMENT_TOKEN_TO_BE_REPLACED