You are here: Home / Words / Books / The Piper Calls The Tune – The Life of David Boyd 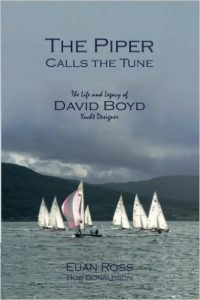 The Piper Calls the Tune is an account of the life and works of David Boyd (1902-1989), a significant and highly regarded yacht designer, who experienced both great success and great frustration through his 60 year career. The book reviews Boyd’s contribution to the maritime heritage of the Clyde Estuary and celebrates his enduring legacy through the 50 years of close racing and camaraderie enjoyed by his classic Piper One Design fleet.

David Boyd FRINA spent his formative years as a yacht designer at Fife’s of Fairlie under the guidance of William Fife III. During this period he worked on the lines and design details of many of the most beautiful yachts ever to be launched at the yard. In particular, he became a specialist in respect of the level-rating International classes in the 12, 8, and 6 Metre bands, which were developed to a high level of sophistication during this period. David Boyd moved to Robertson’s of Sandbank in 1929 and remained as in-house designer and later Managing Director until 1968. Robertson’s yard was one of the best boatyards anywhere in the World during this period. In the post-WW2 years, David Boyd was as famous as any naval architect might become in the UK.

His high-profile racing yachts had won some of most prestigious competitions of his era. His 6 Metres won three Seawanhaka Cups, the One Ton Cup, the Marstrand Trophy, six Solent Silver Medals, top-scoring individual boat in the British Americas Cup and more. He could also claim the season’s champion in 5.5 Metres and a number of champion Windermere 17s. These winners are, of course, in addition to Boyd’s best known work from the 1950s and 1960s – the three sublime, yet polemic 12 Metre yachts designed for the America’s Cup.

David Boyd was primarily a designer of one-off boats with a common and unique aesthetic. He bore the creative spark of Watson, Barnett, Fife and Mylne through decades of economic depression, conflict and post-war austerity and he was never prepared to sacrifice good looks for marginal gains. Boyd designed just one, one-design class. It carries the pedigree of the larger more glamorous racing boats and is the Piper of our title. The publication year of 2016 marks the 50th birthday of the Piper Class. The Piper story is told from the gestation of the design through to the present day.

The Piper Calls the Tune is a nostalgic insight into a wonderful world of inspired designers, beautiful yachts, eccentric owners and skilled craftsmen. It records the memories of a generation of proud old men who have been pleased to revisit the golden age they experienced, before it is swept away in the revisionist accounts of today that sometimes seem to focus only on Fife, Watson and Charles E. Nicholson.

Brest: the world’s largest maritime festival in photographs by Nigel Pert & Dan Houston with a … END_OF_DOCUMENT_TOKEN_TO_BE_REPLACED