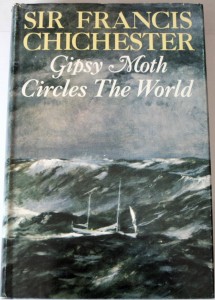 When 65-year-old Francis Chichester set sail on his solitary,eastward journey around the world in 1966, many believed he wouldn’t return alive. But when the old man returned in his 53-foot ketch Gypsy Moth IV nine months later, he had made history’s fastest circumnavigation.

Gipsy Moth Circles the World was an international best-seller when it appeared in 1967.

It inspired the first solo around-the-world race and remains a timeless testament to the spirit of adventure.

The Sailor’s Classics presents the best writing about the sea as observed from the perspective of a small boat under sail. The stories range from pensive cruises in sheltered waters to tales of endurance and high adventure and each one features an introduction from Jonathan Raban, whom The Guardian has called “the finest writer afloat since Conrad.”

The delight in stories well told is as intrinsic to who we are as a species as toolmaking or song. And from time immemorial, few narrative genres have had the power to so stir the emotions or captivate the imagination as the true account of a lone adventurer’s triumph over the titanic forces of nature. Among the handful of such tales to emerge in the twentieth century, one of the most enduring surely must be Sir Francis Chichester’s account of his solitary, nine-month journey around the world in his 53-foot ketch Gipsy Moth IV. The story of how the sixty-five-year-old navigator single-handedly circumnavigated the globe, the whole way battling hostile seas as well as his boat’s numerous design flaws, is a tale of superhuman tenacity and endurance to be read and reread by sailors and armchair adventurers alike.

First published in 1967,just months after the completion of Chichester’s historic journey, Gipsy Moth Circles the World was an instant international best-seller. It inspired the first solo around-the-world race and remains a timeless testament to the spirit of adventure.

Brest: the world’s largest maritime festival in photographs by Nigel Pert & Dan Houston with a … END_OF_DOCUMENT_TOKEN_TO_BE_REPLACED