You are here: Home / Words / Books / A Full Cup – Sir Thomas Lipton’s Extraordinary Life and his Quest for the America’s Cup 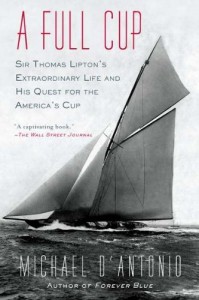 “A Full Cup” is a delightful biography of Sir Thomas Lipton, businessman, sportsman and character. Born in Scotland of Irish parents, Lipton spent much of his life crossing between Britain and America where, with his bow tie and yachting cap, he became as much of a fixture as he did at home. Known as the Brit that challenged the Yanks for the America’s Cup, his yachts, all named Shamrock, were the closest to win back the ‘Auld Mug’ for decades.

Many associate the Lipton name with his tea company, and some may even remember his caricature on the box, but few today know the rest of the story. After learning the trade in his parents’ small grocery, Lipton left home for his first visit to America. This taste of America included serving as a replacement for freed slaves in the South and working on streetcars in New Orleans. Upon his return to Scotland he went founded the first grocery chain in the world. Emphasizing quality goods imported from Ireland and elsewhere, Lipton turned his idea into a fortune. Recognizing the inconsistent quality of tea sold in Britain and the U.S., he formed a business, literally from the ground up. From the tea plantations through packaging, shipping and, in some cases, retailing, tea was a Lipton operation. His quality control and astute marketing made the name Lipton synonymous with tea. Lipton himself became the face of his company. His constant public appearances made him a face and personality known across two continents. The confident of kings and friend of presidents, Lipton would pass through doors he would have never thought would open to him.

Like many successful businessmen, Lipton turned to an avocation. In his case it was challenging for the America’s cup. Even though he never learned to sail, he would be the sponsor of five challenges over a thirty year period. Although he never won, and his boat was always outclassed, Lipton won the heart of his other country, America and sold a lot of tea in the process. His ability to turn his yachting publicity into tea sales was irritating to his American competitors who could not reap commercial benefits from the Cup races. Toward the end of his long career, his popularity was so great that Americans were actually rooting for him to win.

That should give you enough about Sir Thomas to whet your appetite for more. Now that your attention has been grasped, let us get to the book. It is very well written. The story will never bore, the writing style never lose your attention. It has enough connection with the bigger world to be really interesting, but trivial enough to remain a light read. Whether you are looking for history, a fascinating story or just a book to pass the time with, “A Full Cup” will satiate your thirst.

Brest: the world’s largest maritime festival in photographs by Nigel Pert & Dan Houston with a … END_OF_DOCUMENT_TOKEN_TO_BE_REPLACED