You are here: Home / Words / Books / Down Channel 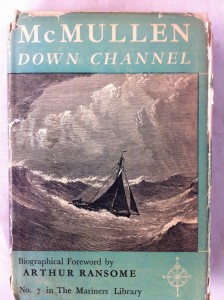 McMullan’s descriptions of his cruises, the conditions, problems and pleasures he encountered, his observations on the trials and tribulations of cruising, and of his feelings and emotions are authentic and easily identified with by anyone who has cruised in a small yacht.

The cruises described were made in seven yachts; Leo – 18ft and 2 ¾ tons, Sirius 32ft and 11 tons and Orion 38ft and 16 ½ tons were all conventional gaff cutters of their time, heavily sparred and deeply ballasted with running topmasts and bowsprits. Orion was later lengthened to 44ft and 19 ½ tons and re-rigged as a yawl. In these yachts McMullan sailed with a paid crew, a boy only in Leo and man and a boy in Sirius and two men in Orion. It is perfectly clear that he himself was the master and ship manager and that the crew were just that.

Later in his career he took to cruising single handed in the English Channel aboard the lug rigged yawls Procyon and Perseus. Procyon was a clinker built in 1867 as a 21 ft dipping lugger with a centerboard.Perseus was a straight stemmed , transom stern, deep ballasted 27 ft. 7 ton lugger in which he cruised to Devon single handed in 1890.

In these yachts, from his base at Erith on the Thames, McMullan cruised the English Channel, the east and west coasts of Scotland and the south west coast of Ireland. Generally he made long passages to and from his destination where he spent most of the summer in detailed exploration of the area. He cruised from the Thames to Lands End aboard Leo in 1857, around Great Britain aboard Sirius in 1863; around England, Wales and southern Scotland (passing through the Bowling Canal) aboard Orion in 1871, and around the British Isles non stop aboard Orion in 1887. There are accounts of cruises to the south west coast of Ireland aboard Sirius in 1861 and Orion in 1869.

He passed away at the helm of Perseus on the night of 14 June 1891- a fine night with a light breeze and a young moon shimmering on the placid sea. He is buried in the graveyard of the protestant church at Beuzeval in Normandy.

Perhaps the greatest pioneer of cruising in small yachts, McMullan maintained the highest standards of seamanship and ships husbandry, his cruising was bold and adventurous, meticulously planned and stubbornly executed. By his example and writings he showed that small yachts were safe at sea in heavy weather so long as they kept adequate sea room. It was largely he who freed cruising yachtsmen from timid and dangerous dependance on making harbor in heavy weather – and for that, we his successors are indebted. (Amazon review)

Brest: the world’s largest maritime festival in photographs by Nigel Pert & Dan Houston with a … END_OF_DOCUMENT_TOKEN_TO_BE_REPLACED