You are here: Home / Words / Books / Hornblower – A Ship Of The Line 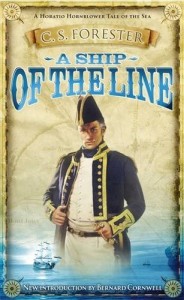 May, 1810 – and thirty-nine-year-old Captain Horatio Hornblower has been handed his first ship of the line . . .

Though the seventy-four-gun HMS Sutherland is ‘the ugliest and least desirable two-decker in the Navy’ and a crew shortage means he must recruit two hundred and fifty landlubbers, Hornblower knows that by the time Sutherland and her squadron reach the blockaded Catalonian coast every seaman will do his duty. But with daring raids against the French army and navy to be made, it will take all Hornblower’s seamanship – and stewardship – to steer a steady course to victory and home . . .

This is the seventh of eleven books chronicling the adventures of C. S. Forester’s inimitable nautical hero, Horatio Hornblower.

Brest: the world’s largest maritime festival in photographs by Nigel Pert & Dan Houston with a … END_OF_DOCUMENT_TOKEN_TO_BE_REPLACED